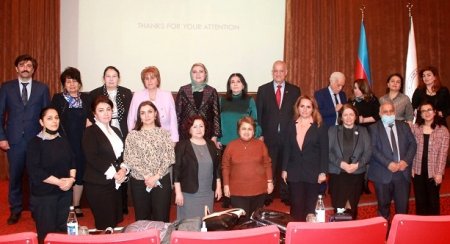 The scientific seminar of well-known scientists of the Islamic Republic of Iran, professors of Tabriz University of Medical Sciences Sudaba Davaran and Aziz Iftikhari was organized by the Department of Biological and Medical Sciences of ANAS.

The seminar, which took place in the big assembly hall of the Institute of Molecular Biology and Biotechnology of ANAS, was attended by heads of scientific institutions, scientists and specialists of the Department, scientists and professors of Azerbaijan Medical University and Baku State University.

Opening the event, Vice-President of ANAS, Academician Irada Huseynova informed the participants about the Iranian guests. He said that Professor Sudaba Davaran is a professor of pharmaceutical biomaterials at Tabriz University of Medical Sciences and director of the university's Center for Health Innovations. The guest is an authoritative scientist and teacher of organic and polymer chemistry, biomaterials, synthesis of organic compounds, nanomaterials, nanotherapy. He is also the director of the East Azerbaijan branch of the Iranian Nanotibm Society. Sudaba Davaran, who is well known not only in her country but also abroad, is an invited professor of Istanbul Yedditepe University and other well-known universities, a laureate and consultant of UNESCO and other international, regional and national organizations.

Aziz Iftikhari is a professor of Pharmacology and Toxicology at Tabriz University of Medical Sciences. He also works as a manager, consultant and international office coordinator at the Center for Health Innovations at the same university. Aziz Iftikhari also works as a guest professor at a number of world-renowned universities and science centers, including the Izmir Institute of Technology in Turkey, Istanbul Yedditepe University, Drohobic State Pedagogical University in Ukraine, and the Slovak Academy of Sciences. He is the scientific coordinator of the Ukrainian-Azerbaijani International Center for Research and Education in Nanobiotechnology and Functional Nanosystems, the head of several international projects, the organizer of prestigious scientific conferences.

Then, Professor Sudaba Davaran made scientific reports on "Innovative role of nanotubes in human health" and Professor Aziz Iftikhari on "Nanobiosensors and in vitro toxicological methods." Extensive discussions were held around the speeches, the speakers answered numerous questions of the seminar participants.

The seminar also focused on strengthening and expanding scientific cooperation between Azerbaijani and Iranian scientists, joint participation in international projects, joint application of research results and other issues.

Make a Submission
Most Read Articles

Address of the Publisher Journal

Do not spam the submission and follow the instructions properly during article submission. For further assistance feel free to contact us. [email protected]
©2020-2022 – All Rights are Reserved - Azerbaijan National Academy of Sciences